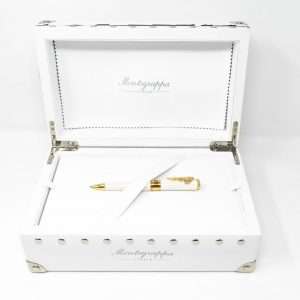 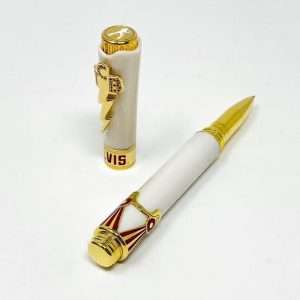 In 2013, Montegrappa will be celebrating the life of the universally-admired performer with its Icons Tribute To Elvis Presley, in honor of Elvis, who transformed popular music at the midpoint of the 20th century and became one of the most important figures in the history of recorded music.

White was selected for the ultimate model in the quartet, representing 1973 _ the year of the ground-breaking Aloha From Hawaii broadcast, transmitted live via satellite on January 14, 1973 and seen by an estimated one billion people. This period was also noted for Elvis Las Vegas appearances, and his signature jumpsuits with gem-stone accents. The pen is set with stones on the cap’s band, and the pocket clip recalls Elvis message to his closely-knit band of friends: TCB, for Taking Care of Business. Montegrappa will produce 500 fountain pens, 500 roller balls and 973 ballpoint pens of this edition. The gold version will be released as 14 fountain pens, 14 rollerballs and 14 ballpoint pens, totaling 42 in honor of his age when he passed away in 1977.

Montegrappa celebrates the life of the universally-admired performer with its “Icons Tribute To Elvis Presley,” licensed by Elvis Presley Enterprises, in honor of the man who transformed popular music at the midpoint of the 20th century and became one of the most important figures in the history of recorded music.
Four models will represent important phases in Elvis’ career from 1956 to 1977. Each pen possesses a resin body in a color suggestive of the each era, with sterling silver or vermeil accents. The fountain pen nibs are engraved with the full-height profile of Elvis at the microphone. Other details unique to each pen and the packaging also denote the specific stage of Elvis’ career.
Las Vegas

₹ 60,000
Add to cart
Add to wishlist
Quick View
Back to Top
We use cookies to ensure that we give you the best experience on our website. If you continue to use this site we will assume that you are happy with it.
Read more Accept
Submit
Hello! Welcome to The Luxury Souq!